Take a Look at the Iconic Crossing… LIVE!

This Abbey Road crossing gets a lot attention from people as it was made famous by the Beatles as the location for their iconic Abbey Road album cover. This zebra crossing, which was granted Grade II listed status in 2010, has to be the most famous one in Britain. In an attempt to recreate the iconic image, Beatles fans and tourists alike regularly pose on the crossing for photographs. This tradition has become so amusing that a CCTV camera has been set up at the Abbey Road studios to capture the action at the zebra crossing and it is broadcasted on to the web. 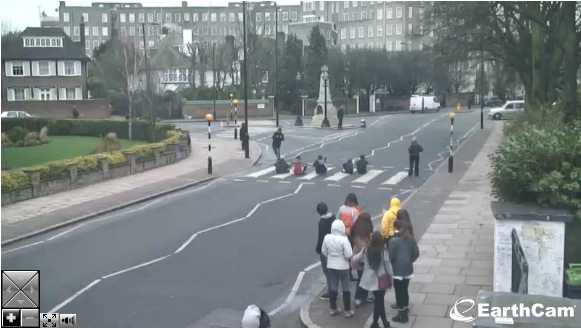 View Larger Map
This is provided by Abbey Road Studios

You can find out more about which cookies we are using or switch them off in settings.

This website uses cookies so that we can provide you with the best user experience possible. Cookie information is stored in your browser and performs functions such as recognising you when you return to our website and helping our team to understand which sections of the website you find most interesting and useful.

Strictly Necessary Cookie should be enabled at all times so that we can save your preferences for cookie settings.

If you disable this cookie, we will not be able to save your preferences. This means that every time you visit this website you will need to enable or disable cookies again.

This website uses Google Analytics to collect anonymous information such as the number of visitors to the site, and the most popular pages.

Please enable Strictly Necessary Cookies first so that we can save your preferences!